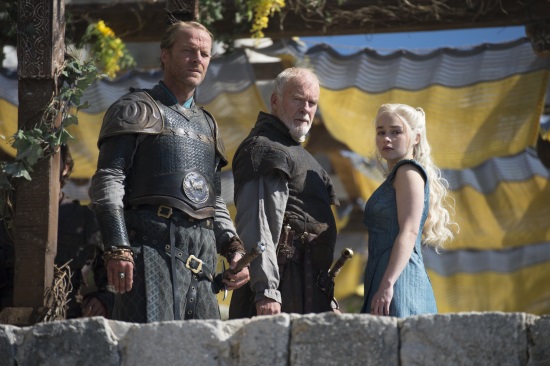 I noted in my review of Mad Men’s season 7 premiere that compared to Mad Men, shows like Breaking Bad and Game of Thrones are less thematically driven and more story oriented. This generalisation does something of a diservice to the way Benioff and Weiss shape the individual chapters of their Game of Thrones saga. Undoubtedly Mad Men doesn’t have the same narrative drive and sprawling scope of Game of Thrones, but neither is Game of Thrones simply a series that moves characters from A to B (very slowly) in order to fulfil the endgame of a complicated narrative structure. In the moments between the beheadings and wedding ceremonies, Game of Thrones episodes are cleverly composed to create, if not thematic unity, then at least a sense of cohesion that stops the show from becoming a series of disparate vignettes that just happen to take place in the same universe.