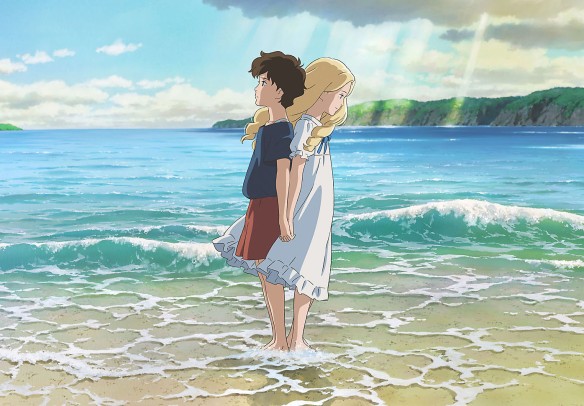 When Marnie Was There follows Anna (Hailee Steinfeld in the English dub) who, due to suffering from increasingly severe social anxiety and depression, is sent away to her Aunt and Uncle’s countryside house over the summer for some fresh air and a change of scenery. While there she becomes transfixed by an old house overlooking the marsh and the golden-locked-girl who resides there, Marnie (Mad Men‘s Kiernan Shipka).

If the rumours are true, When Marnie Was There potentially stands as Studio Ghibli’s last original film. Released last year, Isao Takahata’s masterful impressionistic folk story The Tale of Princess Kaguya would have been a worthier final feather in Ghibli’s overstuffed cap. As it stands, Marnie shares the same virtues and vices that marked director Hiromasa Yonebayashi’s previous film, 2010’s Arriety.

As a director, Yonebayashi shines brightest in the moments of subtle emotional character beats; the snapping of a pencil against paper, the reaction to an insult. The most affecting moment of the film passes without incident or embellishment as Anna finally refers to her guardian as her mother. The mother quietly starts to tear up and then continues what she was doing.

Despite some fantastical elements, the world of Yonebayashi’s films are very much grounded in bucolic realism and therefore lack the visual grandeur of Miyazaki’s more fantastical settings or the aesthetic eccentricity and playfulness of Takahata’s parables. As with all Ghibli films, the backgrounds are nicely detailed, particularly in the mundane settings of living rooms or quiet country roads, but the character design here is a tad on the generic side, which isn’t helped by an emotionally withdrawn protagonist who sleepwalks through half the film. 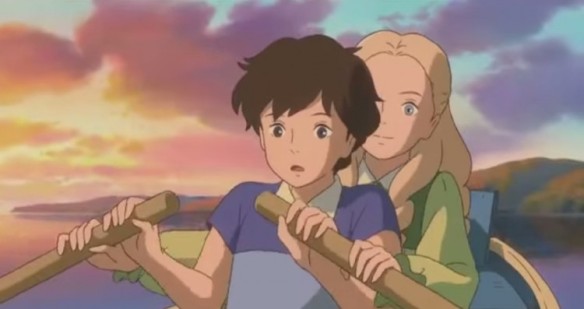 The film also suffers from the tone of the interactions between Anna and Marnie. It is immediately clear that something is wrong with Marnie. She’s too perfect, too accommodating and too affectionate. Is she a ghost? Is she a facet of Anna’s imagination? Or is she simply a lonely girl who can relate to Anna’s feelings of depression and social seclusion? I won’t answer that question but I will say that even though the conclusion does a fair job at explaining the nature of their interaction, it doesn’t undo the cloying nature of all their scenes together which tend to feel juvenile – an on occasion somewhat homoerotic – even considering the age of the protagonists.

As is often the case with Studio Ghibli works, the characters also have a tendency to over-explain every thought that comes into their head when they’re alone, just in case we don’t understand exactly what they’re feeling or what they’re about to do. This is confused even further by an occasional internal monologue where the very few things they don’t announce out loud are heard in voice over. It’s very rarely necessary and detracts from the emotional subtlety that the character direction carries perfectly well.

The film works best in its opening and closing passages where it directly sets up and examines Anna’s fears and social awkwardness. These scenes are exceptionally relatable to anybody who suffers from social anxiety and I really do have to applaud the making of a film that features a protagonist who is genuinely suffering. Anna is oftentimes unlikable and occasionally so overcome with anxiety that she can barely speak. It makes a nice change from the usual American underdog ‘I’m a dork and dropped my lunch tray and now the hot girl in school thinks I’m lame’ protagonist.

The film also features a nicely done dub with very little awkwardness in terms of translation or conversational flow and boasts across-the-board solid voice performances (although I spent the entire film trying to place Anna’s uncle’s voice. When I saw John C. Reilly’s name in the credits I nearly slapped myself the face. His voice is so distinctive, who else could it have been?)

While I’m always glad to see a new Studio Ghibli film – that Blue Totoro logo brings an automatic smile to my face – When Marnie Was There doesn’t join the ranks of top Ghibli fare. It’s a film of occasional emotional potency, that underwhelms due to tonal issues and some muddled storytelling. Here’s hoping Studio Ghibli has plenty more films down the track, but if this is Ghibli’s swan song, then at least we can say this film does nothing to damage Ghibli’s legacy.