I could spend 500 words explaining the phenomenon of Game of Thrones and how pervasively it has entered the cultural zeitgeist and how the hubbub over the #redwedding forced the few who weren’t watching (including myself) to rush through a catch up, but I’d be repeating every second article written in the last week, so let’s talk season 4.

As per usual I will separate my comments and impressions by characters:

The Lannisters: The Lannisters, particularly Jamie and Tyrion got much of the focus this episode. Jamie was, for the first 2 seasons, my least favourite character, but continuing from his more fleshed out and sympathetic role in season 3, he continues to become more interesting as his relationship with Brienne makes a better man out of him.

His conversation with Tywin more than demonstrates his new position in the kingdom. Although Tywin has a ‘slightly less hard’ spot for Jamie in his heart, Jamie has essentially become as inadequate to fight and lead as Tyrion. Charles Dance as usual commands the screen in this scene without any theatrics, as though everything he says is simply fact and if anyone has an issue with that, they can go cry about it elsewhere. 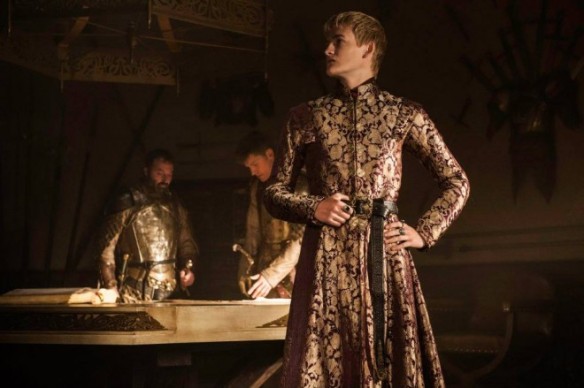 I don’t normally feel the need to talk about Joffrey because he’s so one-note (not a criticism). But he got two of the biggest chuckles of the night from me (the show is not completely self-serious). Firstly seeing the ridiculous statue honouring Joffrey for his win at Blackwater, then secondly, in the shrewdest edit of the episode, having Joffrey match his statue’s posture in the next shot. It tells you all you need to know about Joffrey; he sees himself as a hero despite any evidence to that fact. He’s truly convinced himself that the battle was won by him which makes him delusional to the nth degree.

Cersei, who was one of my favourites after viewing the pilot, has become almost as insufferable and stubborn as her son. It makes sense for the character; her lover was captured and she has been forced to marry a ‘pillow-biter’, but I want more of the feisty, dangerous Cersei from season 1, not the depressive she’s turned into. Hopefully she gets more to do this season.

Season 2 was Tyrion’s time to shine, but like for Cersei, Tywin’s return and his appointment to the Hand of the King has made sure that all the Lannister children know their place (hint: it’s not a very nice place). He has to handle a thankless role, an unloving father, a grieving child bride and a needy lover. Dinklage plays his timid resignation well, but as with Cersei we are waiting for a spanner to be thrown into the works and turn their fortunes around.

The Tyrells: Sticking with Kings Landing folk, I must say that I enjoy checking in on Margaery and Olenna. It allowed for some great comic relief with Diana Rigg marvellously gnawing at the scenery and relishing her role as someone who knows the rules of the game so well that she can break them as she pleases. Only Tywin can match her on this front. These scenes don’t really further the plot but it reasserts the importance of the Tyrell family in this game (of thrones), and it reminds us how much work it takes to marry such a man as Joffrey, and pretend to like it. Margaery never gets a lot of screen time but Natalie Dormer is great at playing a sweeter, less coarse version of Olenna. She plays the person she needs to be, but always by her own rules. She lets Joffrey thinks he owns her when really she owns him, and that will put her in a position of great power.

Daenerys: It’s to the great credit of the writers and the actors that the cutesy romantic-comedy scenes between Daenerys and Daario don’t feel out of place in a subplot that also contains massacred children. It works because it stays true to the characters. Daario has always been seen as a bit of a wannabe charmer, and we know Daenerys has a good and honest heart beneath her necessarily hardened exterior.

Now Daenerys is another character that has grown on me considerably over time, but there is a creeping sense that her arc this season will simply be a rehash of her season 3 arc. Go to a town that uses slaves, kill the slave owners, add the slaves to her growing army; repeat until invincible. At least they have the good sense to indicate that being the mother of dragons doesn’t mean her babies will be tied to her forever. This sets up some ambiguity in the power play for season 4; how much power and control does she really have and is she indeed as unstoppable as she appears?

Arya and the Hound

This was another case of one of the best characters on the show being let down by a sense of déjà vu. I love Arya, (who doesn’t?) and though I’m indifferent to the hound, they have a nice rapport (like Jamie and Brienne last season). I understand that the show has to demonstrate how badass and bloodthirsty Arya has become in the wake of the death of….well pretty much her entire family. But this episode doesn’t show anything that the season 3 finale ‘Mhysa’ didn’t already demonstrate more succinctly when she killed that man in cold blood. As soon as we see the 2 men peeing outside the tavern, we know exactly how the scene is going to play. Yes, the fight scene was bloodily entertaining but I hope this isn’t all Arya and the hound do this season, because this storyline is already starting to feel repetitious.

Jon Snow: Jon Snow no longer knows nothing. I like this new no-bullshit version of Jon Snow. Normally any scene at the Night’s Watch puts me to sleep, but his ‘courtroom sequence’ was well paced and to-the-point, serving to show both Jon’s new post-deflowering, no-nonsense outlook and to remind the audience of the dangers our characters will face in the near (hopefully) future. Even Sam didn’t annoy me as much as he usually does. Always the sign of a well-written episode.

Overall Impressions: I always enjoy GoT premieres. It’s not easy to juggle umpteen characters and reintroduce (or introduce) their emotional outlook and narrative arc but writers and show runners David Benioff and D. B. Weiss (who also directed) pull it off with style and confidence to spare. Best of all, with so much to introduce, none of these scene felt like they were treading water (my biggest problem with the show); they all carried important new information and brought new dynamics to the show.

– The Wildlings are given some time in an expository sequence that is saved from relative blandness by the fantastic reveal of the arm at the end, which says more about the Thenns than any introductory conversation could.

– Daenarys’ main dragon looks really happy all the time but I guess it’s just the way the teeth sit. I’d like to think that he/she was enjoying his/her quality time with mother.

– By the same tack, has Shae left for good. Because honestly that wouldn’t really bother me.

– Critical response to the arm on the stick: ewwww

– ‘If we beheaded every ranger who lay with a girl, the wall would be manned by headless men’. It’s good to see the show take a practical approach to these antiquated codes and oaths. Though we know that Walder Frey takes them seriously.

‘I grew up in Kings Landing’. Zinggggggg!!!

-‘Lots of people name their swords’. ‘Lots of cunts!’. Best exchange of the episode.

– The shot of the girl on the cross and its composition of the sun blistering down, separating the girl and Daenerys was hauntingly beautiful.

– I absolutely loved Olenna’s reaction to Brienne and Brienne’s surprise at her acceptance. Also her non-chalant disposing of the tacky jewellery was priceless.

– On Margaery’s suggestion that a necklace chosen by Joffrey would leave her with a string of sparrow heads: any put down of Joffrey makes you an endearing character.

– ‘A one handed man with no family needs all the help he can get’. Damn Tywin. You cold.

– The little wave Jamie gave to the goldsmith was simultaneously amusing and depressing.