I don’t think we’ve ever seen Don Draper so powerless and uncomfortable in what was once his natural environment. The real triumph of ‘Field Trip’ is the way director Christopher Manley along with Weiner and co-writer Heather Jeng Bladt, take the SC&P offices, a place that has become so comfortable and inviting for its audience and turn it into a scary, foreign environment, where even a partner who helped build the company feels out of place.

For all intents and purposes, this episode is a two-hander, with Don and Betty taking centre stage. Betty’s story is triggered by a lunch with Francine, who is now working part time. When Francine agrees with Betty’s self assessment of being ‘old-fashioned’, Betty responds with her usual ‘I’m confused, but I’m pretty sure I didn’t like what you said’-glare. There was a time when Betty would have been proud to resemble something old-fashioned. She’s always wanted to be like her mother. She wants to be timeless and ageless and she associates ‘old-fashioned’ with old fashioned values, order and everything in its proper place, but the 60s has grown beyond that. She’s just become an old-fashioned housewife whose only job is to look after her children, children she fears hate her.

Obviously the real issue is that Betty is still a child herself. Every time Henry Francis comes into a room I can hear the audience sigh with relief, ‘thank goodness there’s an adult in the house to sort this situation out’. God bless her for trying though; I can’t see season 1 Betty drinking that milk. Weiner is continuing to push the growth we saw from her in season 6, but it’ll be a slow uphill battle. It’s obvious to everyone but Betty how much Bobby loves her, in fact the show probably pushes it a little too far into sappiness on this point; ‘you can’t sit there, that’s my mom’s spot’. But Betty is so unwilling to believe this love that one little moment of kids being kids (Bobby trading away her sandwich) leads her to declare that he ruined the entire day. To deal so utterly in absolutes and overlook the fun they had before that moment is such a childish reaction to a childish situation. As is her question of ‘Why don’t my children love me?’, a question so depressing and unwarranted that Henry just walks away as Betty sits stoned-face in her room with Gene. The real question she should be asking is ‘Why can’t I let myself be loved?’ 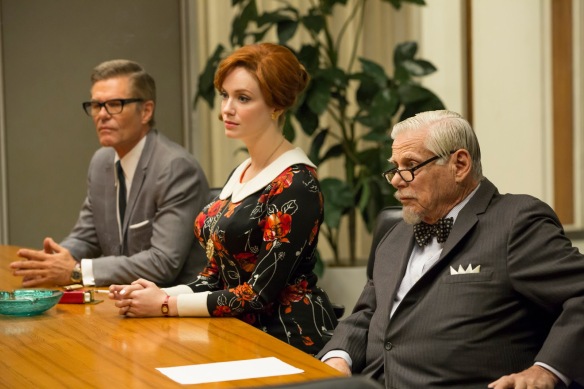 Don starts this episode in a relatively comfortable position. He still believes that Dawn works for him, he still believes that he’ll inevitably move back to SC&P, no harm, no foul, and if that doesn’t work he’s getting fantastic offers from rival ad agencies. He has moral superiority over his wife who he hears has been acting crazy in L.A. and he still holds power over her in that she doesn’t know his secret working arrangement and he can do what he wants with his day with impunity. One by one, all of these illusions and beliefs become crushed into a ball and thrown back in his face.

Don and Megan’s break up (permanent or not) has been a long time coming and I’m glad that it was dealt with swiftly and with surprising maturity on Megan’s part. The last thing I want to see is a protracted break-up. Don’s return to the office is entirely more uncomfortable and sustained. The success of this segment is not purely due to Don and the audiences alienation from the rest of SC&P but also the sense we feel that Don doesn’t really belong there anymore. There is something about the way that Don rounds the creatives into work room that feels a little wrong, like an outsider sneaking into a business’s private sanctum, poking his nose in where it doesn’t belong. Even Don himself begins to believe he doesn’t belong there, especially after the less than warm welcome from Peggy, Joan and Jim. He spends most of the episode sitting down like an awkward child as character’s like Peggy come in to scold him and walk away or Lou enters to beckon the creative staff to his office. His sense of agency within his own agency (PUN!!!) is essentially non-existent – even Dawn doesn’t enjoy waiting on Don anymore – he just doesn’t fit in.

The fact the Don so willingly agrees to his compromised return to SC&P is a sign of how low he’s sunk since the season 6 premiere. Not since the flashback in season 4’s ‘Waldorf Stories’ have we seen Don so desperate for work and so willing to work from the bottom up. I look forward to seeing how the new social and political dynamics of SC&P fall after this arrangement is put into place.

– ‘Eat your candy!!’. This is Betty thinking that she’s being a good mother. Sigh.

– ‘Chevalier Noir. That’s night or black. Either way it’s the opposite of white’. I love how ineloquent Ginsberg can be.

– ‘Harry Crane? He’s gone. Anything else?’. No one gives a shit about Harry.

– ‘With a clear head everyday you decided not to be with me’. Megan, you can do better.

– I’m very intrigued by the appearance of that random woman during Don’s lunch with the other ad agency. Had they met before, a remnant of his Betty-era transgressions or is she just being very forward?

Overall rating: 8 cigarette lunches out of 10.