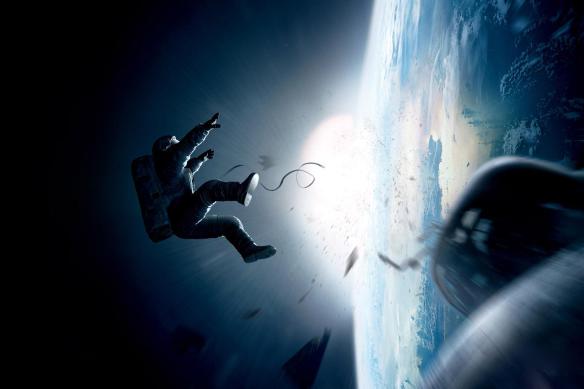 There is absolutely no denying Gravity‘s mastery of cinematic and technological form and the beauty of its visuals. The camera effortlessly glides through the (lack of) air capturing both the enormity of space and the claustrophobic intimacy of a space suit in single vast takes without calling attention to itself. When you have Alfonso Cuarón as the director and Emmanuel Lubezki (Terrence Malick’s longtime collaborator) as the cinematographer, you know you’re going to get images that simultaneously capture all the beauties of nature and humanity by focusing on the mundane and tactile qualities of existence.

So! Fact! You will be blown away by the visuals and all the formal cinematographic storytelling devices that Cuarón and Lubezki employ (having previously mastered them on Children of Men). And that’s all preamble to this point. You leaving the film blown away or disappointed is determinant on whether these undeniably positive qualities are enough to make you forget a by-the-numbers plot, severely under-drawn characters and some awfully clichéd moments and lines of dialogue.

Even before Sandra Bullock says ‘No matter what happens, it’s going to be a helluva ride’, there are a number of moments and lines that make you think, hold on, these scenes don’t belong in a good movie, let alone one that has been touted as a modern 2001: A Space Odyssey. This film has none of the complexity, ambiguity and scope of Kubrick’s masterwork. Rather it feels as if it’s trying to undo the brilliance of the visual filmmaking by saying, look at me, I’m still a regular blockbuster action movie, I can still go for the easy and unearned emotional targets.

Thankfully there is nothing laughably sour in the film. It’s just that Cuarón mistakes simplicity for earnestness and empathy for melodrama. Bullock and Clooney do their best to humanise our heroes. Bullock gets the bulk of the material and ably handles the physical and emotional intensity of the role. Admittedly it’s tough to write scenes of exposition and dialogue when there is only a single character on-screen for a bulk of the film’s running time. But the desire to make Bullock more sympathetic by giving her a tragic back story is unnecessary and devalues the great work that Bullock does drawing us in purely through reacting and a level of determination that never threatens to turn the character into an action hero or have her fall into pluckiness (except for that awful ‘helluva ride’ line).

Even if you find these drawbacks as glaring as I do, you won’t be able to deny the narrative pull of the story. The pacing is tight and the action scenes are impeccably shot and choreographed, with many sequences leaving me holding my breath and squirming in my seat. Essentially any sequence after the opening (which is almost perfect in every way) that didn’t involve long pieces of dialogue (or monologue) is exceptionally intense and involving. And despite the 90-minute running time, the film feels a lot more substantial and isn’t a moment too short.

So there you have it! Some paragraphs on why the film is great and some on why it’s disappointingly mediocre. It is neither of these and both; not quite a failed masterpiece, but rather a beautiful piece of filmmaking let down by pedestrian characterisation and a reliance on clichéd story turns and dialogue.